It has been said that in Artist Mumbiram’s Rasa Art one hears reverberations of nectarean melodies of the ancient scriptures of India. Certainly his paintings are far more than just illustrations of existing texts.

The people appearing in Mumbiram’s paintings are all real people that were sharing life experiences with this passionate artist. These life experiences had a déjà vu quality. They reminded one of situations and episodes from the classics. What is more amazing is that the persons appearing in the paintings exude the same unabashed innocent passion that the great Sanskrit Rasa Classics arouse.

We have all seen Krishna-Leela depicted in Pahari or Mughal miniatures. It is all stylized. The Gopis all look alike. They all have the same fish eyes, the same straight noses that emanate from the same curved foreheads. We can only relate to them as distant mythological figures.

Mumbiram’s pictures show individuals. Women that could be the girl next door or movie actresses or rag-pickers or bird-catchers or whatever. They bring the eternal causeless sporting of the divine with the living entities, leela, to today’s light. They breathe life-air into scriptural visions. Mumbiram’s treatment is free from painterly affectations of brushstrokes and shadows. The lines are sweet and simple, nearly minimal. Such leela ……!

Recently we were able to trace two of Mumbiram’s classical charcoal renderings that were acquired by Guenther Bruns of Luebeck, Germany. The two renderings naturally belong together. They were made in the early eighties in Mumbiram’s legendary Mandai studio. We have been able to zero in on verses from Mumbiram’s “Five Songs of Rasa” which vividly capture in English some touching episodes and visions of Krishna’s Vrindavan Leelas as described in the Tenth Canto of Shrimad Bhagavatam. One can readily see that Mumbiram’s contemporary renderings are based on the artist’s own life experiences but they appear inspired by the same ideal and paradigm that is evoked by the verses from Tenth Canto of Shrimad Bhagavatam we have here.

“Encounter on the way back from the Forest”

The scriptures describe how eagerly the Gopis, the cowherd damsels, used to wait for the adolescent Krishna and his friends to return from the forest with the cows.

Here is a description from the celebrated Rasa Panchadhyayi selection from the tenth canto of Shrimad Bhagavatam.

We remember you most fondly, when at the end of the day you return home with the cows and the boys. Your curly bluish black beautiful locks are bouncing around your dust-covered face. It reminds us of the pristine beauty of wild lotuses. Every time we see that dust-covered brave beautiful face or even remember it, our mind is filled with amorous passions.”

Here one sees a village damsel is returning from the forest with a heavy bundle of forage overhead. The remote hills of India are inhabited by tribals that subsist on fruit, berries, herbs, honey as well as fodder and firewood that is gathered from the forest. At the end of the day men and women come home with heavy loads much to the happiness of those waiting for them all day.

Artist Mumbiram is immensely attracted to that life close to nature. He experiences echoes of the pastoral scenes of Krishna’s boyhood leelas in the forests of Vrindavan.

The amazing beauty of the damsel carrying the heavy load is captured with great élan by the artist’s virtuosity in the charcoal medium.

The young boy is about to rush to his beloved. His cow is the only witness to what follows.

The damsel is pretending to ignore the advancing youngster but the expression on her face leaves much to the imagination of the viewer. 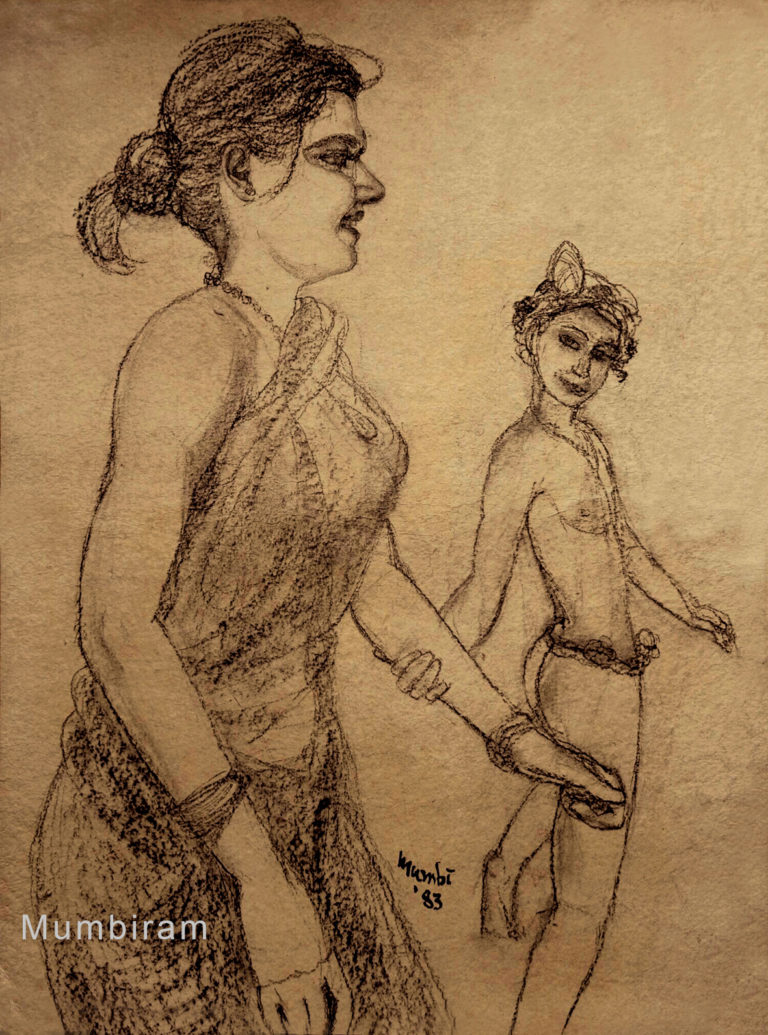 “I let him persuade me”

Living in his studio in downtown Pune or cohabiting with the tribals and gypsies on the hills of coastal wilderness, the artist was making paintings that show the folk-people of India for the first time in the sublime context of high-spirituality and neo-modern aphrodisia.

Mumbiram finds the poorest are living the kind of idealized life Krishna lived 5000 years ago. He thinks it is unfortunate that the civilized world of city people misses out on the beautiful and touching human side of the tribes living a life that is closer to the life of adolescent Krishna that is considered to be the ultimate object of meditation by the revered scriptures of India.

“We are enamored with Krishna’s walk. But when he bestows a sporting glance upon us we are totally bowled over. We are transfixed to the ground like trees. We perforce yield to the urges of amour. We are unable to mind our clothes or hair.”  (ll 17 ll Yugala Geetam, Five Songs of Rasa, Mumbiram)

“Our story is a little different. We were drawn to him just as the beautiful innocent black doe are drawn into trap by the false mating-calls of the hunter. We believed as true all the lies he told us and all the promises he made to us. And now we have experienced the whole gamut of symptoms and sufferings of this excruciating malady of passion caused just by the touch of his mercilessly adept finger-tips. Dear messenger. Tell us about anything else.”   (ll 8 ll Bhramara Geetam, Five Songs of Rasa, Mumbiram)

These renderings are examples of how enlightenment and aesthetic are intimately intertwined in the Rasa masterpieces of Mumbiram.

The title suggests the young lady’s inclinations towards the young boy’s light-hearted liberties.

The simple, graceful lines in Charcoal depict the Rasa of the situation in a masterly way.

Poet on the Bank of the River